About I’m a Scientist

I’m a Scientist is like school science lessons meet the X Factor! School students choose which scientist gets a prize of £500 to communicate their work.

Scientists and students talk on this website. They both break down barriers, have fun and learn. But only the students get to vote.

This is the Tellurium Zone. It has a range of scientists studying all different topics. Who gets the prize? YOU decide! 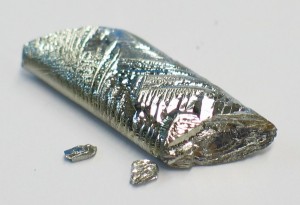 Here on Earth, we do not have much tellurium (tell-err-ee-um), nor, it turns out, do they have a whole lot of it out in space. In fact, it was only discovered in the stars early last year. Even though all element are found in the stars (the stars are where elements are formed) and even there there isn’t much of it.

Back on Earth, we have only a little, and certainly not enough to do much of anything with; the best we can come up with is using it in some—rather expensive—lasers.

Were you lucky (or unlucky, but we’ll come to that in a moment) to hold in your hand a piece of tellurium, you might think it to be a shiny, silvery metal, but you would be wrong. Tellurium is in fact not a metal at-all, but something called a semi-conductor. A metal is a conductor, this means electricity can flow through it relatively easily. An insulator is a material through which electricity cannot flow; a plank of wood, for example. Semiconductors however are special; depending on various circumstances, such as the temperature, a semiconductor can act as both an insulator or a conductor. So by changing the temperature, it might be possible to prevent or allow the flow of electricity, making a sort of temperature sensitive switch. There are however more materials which are better semiconductors than tellurium, and ones of which we have a lot more.

Tellurium has perhaps one redeeming feature, if that’s how you want to look at it. Tellurium, if it gets under your skin—and it takes only the tiniest amount—will make its way to your sweat glands, and make you smell of the most atrocious garlic you could imagine.

So that’s tellurium. Pretty to look at, but rare, fairly useless, and makes you smell gross.

Teachers don't need to book, and students are free to drop in and talk to the scientists.. If they have any burning questions or haven't yet experienced a live chat.